Its hard to think of life without the beauty of jewellery, and the evolution of jewellery has been a fascinating journey. The way advancements in technology and knowledge brought about intricate and unique pieces throughout history.

Lets continue our journey through time, and see how jewellery evolved.

While it was a period of huge industrial change, Jewellery design in most parts focused on the past. Classic styles like that of ancient Greece and rome were popular in the starting part of the century. By the 1850s the delicate early designs had given way to more extravagant and complex patterns of flowers and foliage. The colours of nature were matched by coloured gemstones. In contrast to earlier periods, the more elaborate jewellery was worn almost exclusively by women.

Developing in the last part of the 19thcentury, there was a movement towards the Arts and Crafts. The jewelers had started rejecting the machine led factory system (the source of affordable jewels), and instead focused on hand crafting individual jewels. They avoiding large, faceted stones, and infact relied on the natural beauty of cabochon gems, often with some type of symbolic meaning. 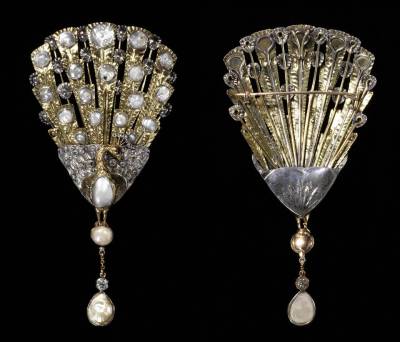 Between 1895-1910 there were designers who put greater emphasis on different types of material like glass, horn, and enamel in their designs, and through out the first part of the 1900s even through the cycles of war and depression, jewellery design continued to be innovative and glamorous. Sharp, geometric shapes celebrated the machine age, while exotic creations hinted at the grandeour of the gems. There was a clear distinction between the different types of jewellery

From the mid 1930s gold started making its way back into fashion jewellery, and artists and designers from other fields became involved in jewelery design as well.

Since 1960s the boundaries of jewelery have been continuously redefined. New technologies and materials including plastic paper and textiles, have changed what we think is jewellery. Avant-garde artists have explored the interaction between jewelery with the body, and jewellery has now developed into wearable art.

It is also interesting to point out that this was the period of three dimensional stylized animals set with vivid semi precious stones, usually characterized by leopards and panthers from Cartier, Van Cleef and Arpels’. Not to forget the Bulgari’s signature serpenti jewels.

As fashion evolved and reached the 21stcentury, it became fashionable to mix metals, wear different sytles of jewellery through the ages, and even layering of chains and stacking of jewellery. Retro fashion became a big hit during the first part of 2000.

The latest revolution which has completely changed the jewellery industry has been the introduction of 3D printing. Suddenly complicated designs and mass production were possible. More people were now able to afford fashionable jewellery. This in turn created a fashion movement, and inspired many new forms of jewellery. Suddenly new and interesting materials were being used to create complex and intricate jewelery.

Jewellery is the cornerstore of any civilization. It creates a story and in essence carves out the lifestyle of that generation. Through out history, humans have been fascinated by jewellery and that fascination will only keep evolving. Science and technology is also ensuring that anyone and everyone can show their identity through their jewellery.

View all posts by nisheethnayar